Cross That Bridge When You Come To It!

Today’s Topic:  Crossing that bridge when you come to it

We’ve all heard that saying, “Cross that bridge when you come to it”.  Well, this weekend, I did.  In fact, my husband and I crossed around 10 bridges, and went through 2 tunnels.  We rode our bikes from Pulaski, VA to Galax, VA on the New River Trail.This was the second longest ride I’ve ever done; and by far the longest in two years.  My average is around 25 miles.

The New River Trail is a converted railroad route, like so many on the Rails-to-Trails Registry.  We learned that the railroad donated the land to the Parks Authority as a tax write-off, which I suspect has been done with many of the trails around the country.  The trails are all relatively flat, with slight inclines and declines because trains used them first.  We heard that the route from Pulaski to Galax had a slight incline.  I had a hard time believing this because we were headed south.  My mind thought that since we were headed south, it should be downhill! 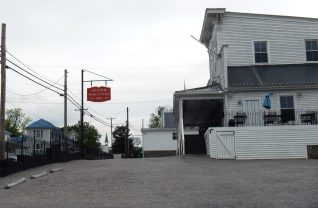 We rode along during the morning, taking our time and stopping along the way.  Everyone said to make sure and stop at the Draper Mercantile, so we did.  We bought a couple of t-shirts to remember the trip.  As we continued along the trail, it started to get a little more remote.  We were warned it would be this way, and to make sure we had enough water, food, etc.  My husband is an Eagle Scout, so we were prepared.

What we didn’t count on happened around mile 15 or 16.  One part of my front axle came apart, and my wheel was coming off.  Luckily, I caught it before it came completely apart, or I probably would have wrecked.  Now we had to figure out how to keep my wheel on with what we had on hand.  As you can see by the picture, we ended up using 2 band aids to hold my bike together.  We were so proud of ourselves for coming up with this idea!

As we continued on, I couldn’t understand why my legs were suddenly so tired.  I wasn’t sure I’d be able to make the entire trip.  Then my husband figured out that because my tire wasn’t setting right in the front fork, the front brake was rubbing, slowing me down.  We unhooked that, and I just needed to remember I only had rear brake from that point on. Of course, in an effort to make me feel better, he commented on the great workout I was getting by peddling with my front brake on.  I, however, was not amused. 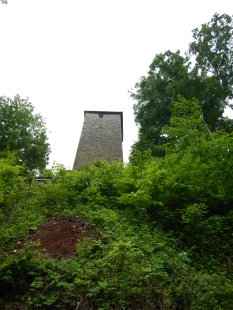 We continued on and rode past one of the few remaining Shot Towers in existence in America.  During the early 1800s this tower was used to make shot for guns (about the size of a BB).  Here’s the link:  http://www.dcr.virginia.gov/state-parks/shot-tower#general_information.

We also rode past Austinville, which ironically enough is the birthplace of Stephen F. Austin, the father of Texas!

We stopped at Foster Falls State Park to eat the sandwiches we brought with us.  This helped renew my energy to finish the ride.

The rest of the ride was pretty much a test of wills for me!  While I enjoyed the sites of the bridges and tunnels, and the peacefulness of the countryside, the pain all over my body was trying to bring me down.  But my husband was a saint!  He kept stopping when I needed to stop, and encouraging me when I thought I’d have to give up. 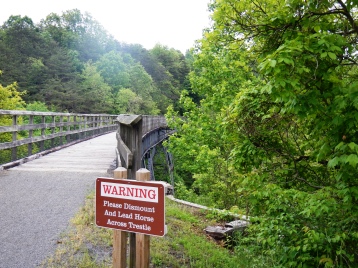 But after 7 ½ hours, a lot longer than we thought it would take, we finally made it to Galax!  I had crossed many bridges, and pushed myself to limits I didn’t know I had.  Yes, I hurt pretty much all over my body, and Tylenol was definitely my friend.  But I was so proud of myself for not giving up! Oh, and they weren’t kidding when they said we’d be going uphill!

The Inn at Hope Springs